Mutual Attraction: The Evolution of Agriculture in Ants

Thanks to cutting-edge genomics research, we may soon discover that the answers to big evolutionary questions lie within the complex world of the tiny ant. 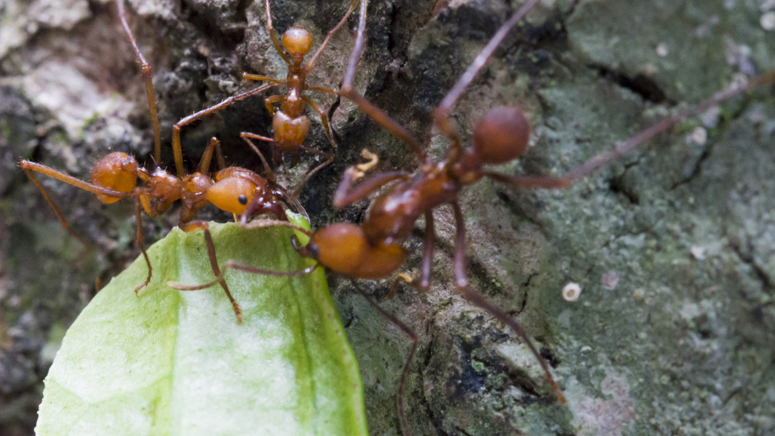 We have all seen the television shows featuring thousands of ants scurrying across a tropical forest floor, each carrying an individual leaf many times its size, culled from a nearby tree or bush to be taken back to the nest and methodically chewed into a paste-like fertilizer.

These ant farmers are one of only four animal groups on Earth that grow their own food, along with bark beetles, termites, and humans.

It could be argued that agriculture represents the apex of sociality—it is, after all, an activity that requires a sophisticated level of cooperation. Why farming evolved in only four groups, three of them insects, is still unknown. But unlocking its mysteries could teach us much about what drives the evolution of complex societies of animals.

Ant farming is a behavior tens of millions of years old, and its study has been a focus at the Smithsonian for decades. Here, entomologists at the National Museum of Natural History (NMNH), in partnership with the Smithsonian Tropical Research Institute (STRI), focus their research on ant evolution and biodiversity, in particular the symbiotic agriculture practiced by the fungus-growing ant farmers known as attines. Cutting-edge genomics research is allowing these scientists an even deeper exploration of the evolution of ant sociality and what it could reveal about species adaptation to environmental change.

There are about 240 species of attine ants, all of which harvest various forms of organic material and process it into fertilizer to grow food. Genetic research conducted by NMNH entomologist Dr. Ted Schulz has initially focused his genomic research on the 40 or so species known as leaf-cutters.

“One of the things that initially interested me about leaf-cutter ants is that they are among a group of ant species that live in intricate, complex socie

ties,” he says. “Once I learned that some are also farmers, adding another layer onto their already sophisticated behaviors, I decided that farming as practiced by leaf-cutters was the most amazing of these behaviors and I wanted to know how it evolved. It has driven my work ever since.”

While ants have been farming for nearly 50 million years, leaf-cutters evolved much more recently, about 8 to 12 million years ago. Found only in the New World, leaf-cutter ants are the single greatest Neotropical herbivore group based on amount of harvested biomass. Their colonies can be massive—dozens of feet deep and containing thousands of rooms through which millions of ants scurry, busily tending their fungus gardens. The ants not only fertilize these gardens, they also keep themselves, and the rooms, meticulously clean to ensure that their fungi remain disease-free.

Even more interesting is the level of mutual dependency that has evolved between the leaf-cutter and its fungus, a light-colored spongy material that resembles beaten egg white. “Every attine that we know of has to have a fungus garden in order to survive—that’s its sole food source,” says Schultz. “However, the majority of these fungi can grow outside the nest and thrive without the ant.” The exceptions are the fungi grown by a group of ants called the higher attines. Like the ants, these fungi cannot grow outside of the colony. When a daughter queen leaves to start a new colony, she always takes a bit of the fungus with her.

Scientists do not yet know why or how this mutual dependency arose. “Obviously, at some point in ant evolution, they found a particular form of fungus they liked and it evolved to be their sole source of nutrition,” says Schultz. “But why the fungus also became dependent, maybe it was using the ant for its own survival, turning itself into a better and better food source.”

If that sounds a bit like science fiction, think about this: if a plant can evolve chemical defenses, could it also not evolve a form of chemical offense? “We just don’t know at this point,” says Schultz. 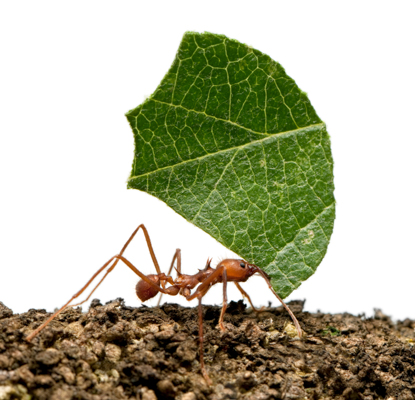 The leaf-cutters are also particular about what they will gather as well, says Sean Brady, a Smithsonian entomologist and one of Schultz’s collaborators at the NMNH. “Lower fungus-growing ants will gather all kinds of organic material, including picking it up from the forest floor. But leaf-cutters specialize only in harvesting young leaves still growing on trees and plants.”

It’s this level of sophistication, and potential for exciting revelations, that attracted Dr. Brady to include ants in his studies. “My interest is in the evolution of sociality in insects, especially as it applies to large-scale evolutionary questions,” he says. “Leaf-cutters represent a pinnacle of social evolution in ants.”

Using genomics to trace the evolution of ant farming

Why the higher attines and their fungi evolved such a specialized symbiotic relationship remains one of the biggest mysteries in insect science. “Our assumption is that in the distant past there must have been some proto fungus-growing ants that could take or leave the fungi,” says Schultz. “It would be great if they still existed today, because it would help us understand how this transition happened. But all we know is that at some point, these ancestors became totally obligate. It didn’t have a choice and neither do its descendants.”

Thankfully, genomics research has the potential to provide answers to behavioral changes that cannot be preserved in the fossil record. At the Smithsonian, genomics are being applied in two initiatives. “At the broadest level, we’re gathering genomic-level data from as many species as we can,” says Brady. “That will allow us to improve our understanding of the evolutionary history of the entire group of leaf-cutters.”

For more in-depth analysis, the museum has partnered with over a half dozen institutions around the globe, including their main partners, the University of Copenhagen and the Beijing Genomics Institute (now called BGI), to analyze the whole genomes of just a few of those species. “We want to do that for both the ants and their fungi,” Schultz explains, “and that really takes a team of people to understand functional genes, what they do, why they change, and how these families of ants proliferated. These genomes will generate data that we can analyze for years.”

The ultimate goal is to understand the transition from lower to higher attine agriculture, and what that says about the evolution of sociality in insects as a whole. “What are the genomic patterns and changes that are common among the different species? What are the common genomic pathways they took to evolve a sophisticated sociality? As well as answering specific questions about ant agriculture, we are also studying whether ants show the same characteristics at the genomic level as a honeybee or termite. Which genes, in other words, predict for social behavior in insects.”

The benefits of agricultural symbiosis

Unraveling the evolutionary transition from lower to higher ant farming might also help our own species adapt to, and maybe even mitigate, a host of environmental and medical challenges.

The same attines that evolved a sophisticated agriculture also evolved sophisticated methods to defend that food source. Not only do they build multi-roomed nests to ensure the greatest number of gardens and keep those rooms scrupulously clean of debris, but they also produce an antibiotic that prevents various pathogens from killing the fungus. While there is a form of parasitic fungus that continually feeds on the attines’ cultivated fungi, as long as the colony remains stable and healthy, that parasite rarely takes over.

It’s a symbiotic relationship that could teach us much about our own medical processes. “Our studies have relevance to scientists who look to nature for examples of sustainable agricultural and medical systems,” says Schultz. “Instead of using antibiotics like we currently do, like a sledgehammer until they become useless and we find another one, maybe there is something we can learn from fungus-growing ants, who have been using the same antibiotics for millions of years.”

Leaf-cutting ants are also extremely efficient at extracting energy out of plant tissue, an ability that has interesting implications for the bioenergy field. “Right now, our technology does not let us extract anywhere near all the ethanols we can out of corn—we’re throwing most of it away.”

Ultimately, says Schultz, leaf-cutter ant studies have the potential to address the underlying questions of evolutionary biology as a whole. “When you study multiple organisms that join together to form super organisms, you are studying model systems for understanding what underlies the major transitions of evolution.”

As we ourselves are faced with having to adapt to changes already manifesting in the environment, we certainly have much to gain by studying the tiny but mighty ant—one of the most resourceful and cooperative animals on our planet.