Alien Invaders: A Threat to Our Shores 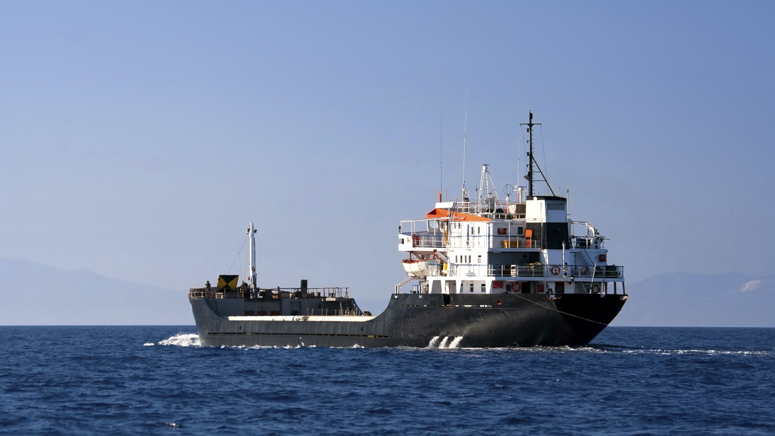 When cruise ships and container vessels pull into port at the end of a journey, they discharge more than just paying passengers and cargo. They also offload a variety of hitchhikers and stowaways—from microorganisms to fish to aquatic plant seedlings—that have attached themselves to the hull, propellers, and rudder or that have taken up residence in the ballast water that helps steady ships. As a result, species are transported from port to port and establish populations at new locations around the globe where they did not previously occur, sometimes with dramatic effects for coastal ecosystems. 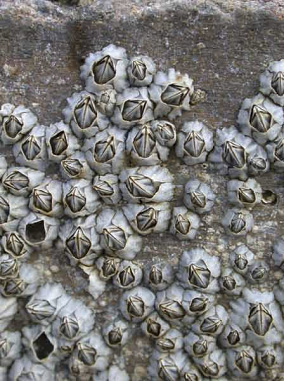 The invaders usually first appear where human activity is at its greatest—in bays and estuaries—and over time they also can spread up and down coastlines. And it’s not just international sea trade and tourism that transfers non-native species across oceans and along coastlines. Other human activities, such as the release of unwanted pets and fishing bait, the release or escape of classroom and laboratory animals, the transfer of organisms for food, and the use of recreational boats and equipment, also play an important role in invasions.

The proliferation of invasive nonnative species is economically and ecologically costly, and can have a detrimental effect on public health. Species that are introduced to new habitats may have no natural predators and can destroy the balance that exists in the ecosystems they occupy. Invaders have played a significant role—through predation, parasitism, and competition—in extinctions and the decline of many threatened and endangered species across terrestrial, freshwater, and marine ecosystems. In fact, introduced species are thought to be second only to habitat loss as a threat to native biodiversity, outpacing even pollution. Additionally, the annual cost to the U.S. economy to manage introduced aquatic and terrestrial species has been estimated at more than $137 billion, and that number doesn’t even include the costs of impaired ecosystem health or changes in the aesthetic value of nature, which also influence tourism and recreation revenue. 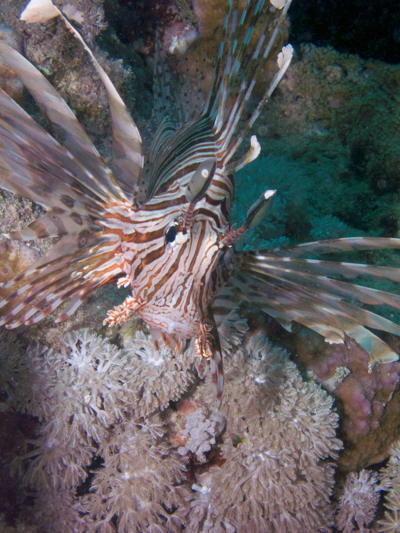 Gregory Ruiz, a marine ecologist and the lead scientist for the Marine Invasions Research Laboratory at the Smithsonian Environmental Research Center (SERC), cites the lionfish invasion of the Atlantic Ocean as a prime example of the kind of destruction that can occur. “Lionfish arrived sometime in the 1980s, when just a handful of them were thought to have been released into Florida waters by pet owners dumping them from their home aquariums,” says Dr. Ruiz.

A native of Indo-Pacific waters, lionfish are beautiful but deadly. It is capable of wiping out 90 percent of a reef through its aggressive eating habits, greatly decreasing the diversity of native species in the process. Today the lionfish ranges from the Caribbean to the southeast coast of the U.S., the Bahamas, and parts of the Gulf of Mexico. They feed on small crustaceans and fish, including the young of important commercial species like snapper and grouper. Lionfish are edible and quite tasty, but because their toxic parts need to be removed carefully before they can safely be eaten, they remain a relatively expensive option for consumers and thus are not heavily fished commercially.

Unlike the lionfish, the majority of nonnative invasions arrive via ocean shipping and passenger travel, says Ruiz. “In California, Asian mitten crabs, which were probably transported in the ballast water of ships, have had a significant economic effect. They go through periodic large outbreaks where they become really abundant, often causing disruptions of freshwater management. They also burrow into levees and dikes and cause erosion, which impairs these structures’ ability to hold back water.”

Invasive pathogens also wreak havoc. “In Chesapeake Bay, the oyster population has declined greatly over time, and the harvest now is just a small percent of what it was historically, which has had a big economic impact,” says Ruiz. “Some of that decline has to do with fishing pressure and water quality, but introduced pathogens have caused widespread mortality that contributed not only to the collapse but also to the difficulty of restoring the population.”

Ruiz’s laboratory is the largest one in the U.S. that is focused on coastal marine invasions, and he leads a group of 35 researchers at SERC’s Chesapeake Bay location and at other labs around the country to survey, quantify, and mitigate the effects of nonnative species invasions. 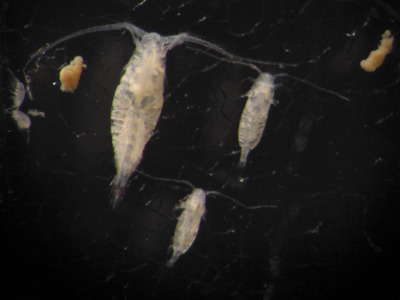 “We conduct surveys in the field that provide baseline measures to understand the current situation and how it changes over time,” Ruiz says. “We examine invasion patterns to see what’s driving current and emerging trends.” The researchers find out which species occur in different bays and estuaries, determine how the number of nonnative species differs among locations and over time, and evaluate how this relates to global trade, transport mechanisms, and environmental conditions.

“Over the past five years we’ve brought in genetic tools that increase our ability to detect species in the environment,” says Ruiz. “We’re building up a genetic library, or barcode library, of individual species, and we are also conducting genetic surveys of entire communities. The combination of morphological and genetic data provides us with a much more robust measurement of the species richness and diversity at a given site, and it also allows us to make repeated measurements over time in a more efficient way.” 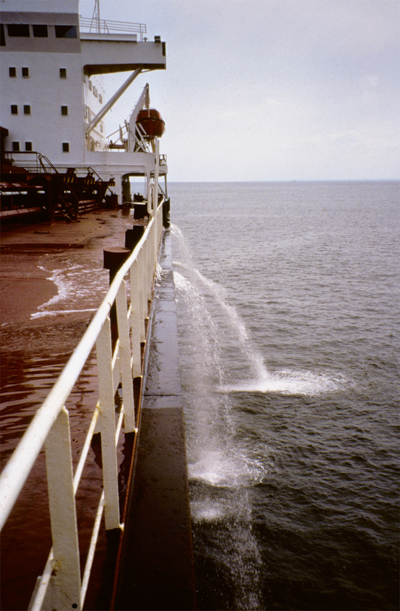 This detective work helps researchers to understand how invasions are happening, explains Ruiz. “When we study changes in the invasion rate over time, we can measure changes in response to management strategies that have been implemented. For example, ships are required to treat their ballast water, and the level of treatment has been ratcheting up for the past 20 years, from flushing out ballast tanks at sea, and including the evaluation of more stringent treatment technologies, such as filtration systems, chlorination, UV, and ozonation. Modern genetic technologies can identify the vast number and condition of organisms in ballast water, and also at recipient ports, so we can understand the effectiveness of these management strategies for limiting new invasions.” 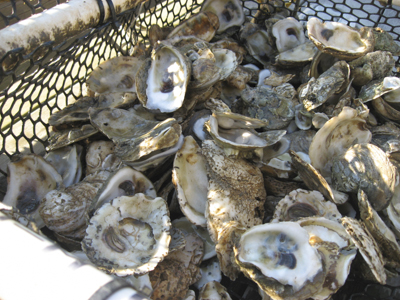 Measuring parasites and pathogens is another important part of these studies. Smithsonian researchers have been surveying oysters and other bivalves from Panama to Chesapeake Bay using genetic tools to evaluate associated parasites, and have discovered that some of these were introduced to marine environments by human activities such as ships and the cultivation of marine life for food. “These genetic tools have opened new horizons, allowing us to gain a great deal of resolution on which parasites and pathogens are present and to explore the potential consequences on disease dynamics—both for oysters and other groups of organisms,” explains Ruiz.

Beyond the current research on marine invasions, Ruiz and others at SERC are exploring the use of genetics in additional areas of ecology, such as the study of food webs and the response of organisms to various changes in the environment. For example, “Genetic tools allow us to more thoroughly evaluate the contents of an organism’s digestive tract, which in turn can tell us important things about its diet,” he says. “By doing this analysis across a number of organisms, we can put together detailed food webs in a way that historically has not been possible. We can also now use genomics to quantify differences in the performance of the organisms in different places or at different times. We expect species to respond to changes in climate, salinity, food types, and so forth. With genetic tools we can better understand changes at the genetic and metabolic level, both on ecological and evolutionary time scales.” These approaches apply to both native and nonnative species.

The Marine Invasions Research Laboratory serves as a key resource for industry and government agencies seeking to manage and set policy for dealing with nonnative species, providing data and analyses of status and trends on a national scale. “Ours is a leadership role in understanding invasion dynamics in marine systems,” says Ruiz. “We work on questions that are driven by basic science but with a strong applied element with regard to management and policy.” The laboratory interacts frequently with U.S. federal agencies—including the Coast Guard, the Environmental Protection Agency, the Fish and Wildlife Service, the National Oceanographic and Atmospheric Administration—state resource agencies, and scientists at universities in many countries, to help inform management and regulatory decisions.

“This interaction,” he continues, “particularly with industry and resource management, is another source of information that really broadens our thinking. We have the challenge of pure science but also the satisfaction of applying it in a useful, meaningful way.”